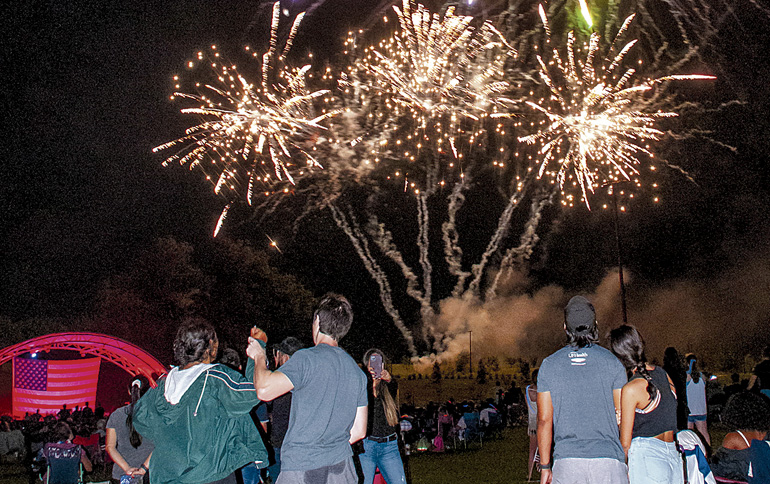 ALACHUA ‒ The skies around Alachua were once again bursting with flashes of dazzling lights as the city’s annual Fourth of July celebration returned Sunday evening to a crowd estimated at some 17,000 spectators.

For 20 years the City of Alachua has hosted an annual July 4th celebration billed as the “Largest Small Town Fireworks Display in America.” The event is so popular that it attracts thousands each year, oftentimes doubling the size of the town’s nearly 10,000 population.

Historically, the event lasts all day, featuring food vendors, children’s activities, games and several bands through the course of the day and evening. The crowd grows throughout the day culminating with the highest numbers for the fireworks show, which rivaled the size and expense of larger metropolitan areas.

But last year, everything changed due to COVID-19. All mass events were canceled or restricted in size and people stayed home to avoid spreading or catching the virus. The City of Alachua canceled the enormously popular event due to concerns for everyone's safety.

This year, the City of Alachua vowed to bring the tradition back. But due to the time it takes to organize the event, with planning starting six months out, and no guarantees about what the situation would be in July, the City opted to stay true to the “Largest Small Town Fireworks Display in America” and focus on the fireworks. Also different this year was the location of the event, as the show was moved from the Hal Brady Recreation Complex where it has been held in previous years to the adjacent Legacy Park and amphitheater.

The day was wet as rain and thunderstorms rolled in throughout the afternoon leaving the Legacy Park field soaked and muddy. But by evening, the skies began to clear, and if there had been any doubts about whether people would show up, those doubts were quickly dispelled by the sheer size of the crowd. After a year of quarantine, social distancing and lack of activities, thousands came out to celebrate the holiday and fireworks. Many brought chairs to avoid the wet ground while others simply stood throughout the show.

The larger than anticipated crowd did cause issues with parking as the ongoing rain left much of the parking area too wet and muddy to use. The reduced parking area at Legacy Park was filled and closed by 7:30 p.m. with traffic backed up on Peggy Road for more than a mile. Police directed people to the Alachua Main Street area, which also quickly filled, leaving many to walk a mile to the park.

The evening’s entertainment consisted of one band, reduced from the multi-band format in the past. Crooked Council performed an energetic set to get the crowd up from 8:30 to 9:30 p.m. As they ended their set, the sky exploded in a barrage of multi-colored fireworks and the show began.

For the next half hour, a continuous display of fireworks lit the night sky over Legacy Park as thousands celebrated the Fourth of July. The celebration looked different this year, but one thing is certain, Alachua’s Largest Small Town Fireworks Display was back.