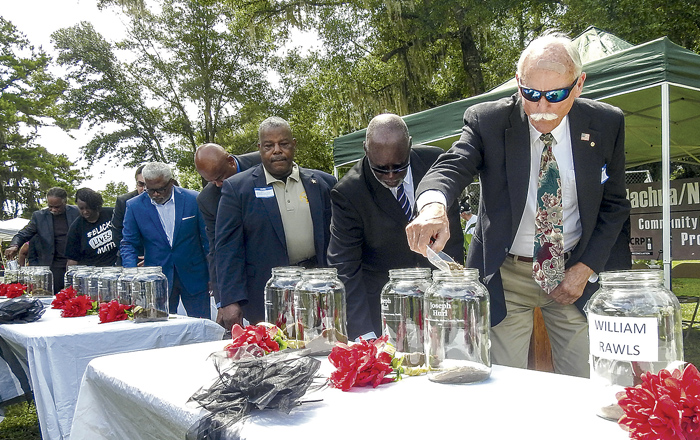 ALACHUA ‒ On Saturday morning June 26, Alachua joined the ranks of Gainesville and Newberry in holding a remembrance event. Held at Mebane Middle School in a drizzling rain, over 100 people attended the event to memorialize lynching victims, especially the eight known victims in Alachua-Newnansville, as well as Reverend A.S.J Allen who was shot to death in 1904.

The Civil War officially ended slavery, but much of the racial tension and animosity from the war and its after-effects on the South still festered. There was no equality between white southerners and former black slaves and equal treatment under the law did not yet exist. More than 4,400 African Americans were lynched across 20 states between the end of Reconstruction in 1877 and 1950. Florida had 350 lynchings, making it fifth in the nation. Alachua County had 19 documented lynchings making it the second highest in the state.

The "Soil Collection Ceremony for Alachua/Newnansville" was coordinated by the Alachua-Newnansville Subcommittee of the Alachua County Community Remembrance Project, which worked in partnership with the Equal Justice Initiative of Montgomery, Alabama.

The subcommittee was formed under the leadership of Alachua Vice Mayor Shirley Green Brown with the purpose of educating the community about past racial discrimination and memorializing those who suffered repression and violence in the Jim Crow era, while also reconciling to bring the community together.

Brown opened the ceremony with poems and song lyrics. “I woke up this morning with my mind stayed on freedom,” she recited from a civil rights-era song. Alachua First Baptist Reverend Doug Felton gave an Invocation followed by a scripture reading by Reverend Debra Frazier Sermons.

Nii Sowa-La led a spiritual tribute Libation ceremony honoring the traditions of their ancestors, where a drink is poured into the ground to honor the dead. He slowly emptied two bottles onto the grass while leading a rhythmic chant as the audience clapped to a beat. “We are calling for forgiveness,” he repeated.

Several prominent officials spoke including Alachua Mayor Gib Coerper, Alachua County Sheriff Clovis Watson, Jr. and Alachua County Commissioner Charles Chestnut, who said the goal of the event was to bring light to the truth and begin to reconcile the tragic historical events.

“We are here to bring the community together and have a real conversation about the history of lynching here in Alachua County,” he said.

Keiana West of the Equal Justice Initiative spoke about the history of lynchings and long-term consequences in the South. “Slavery did not end in 1865, it simply evolved,” she said. “We can’t get to the reconciliation work without the truth telling work, the history needs to be told.”

While each is identified as a victim, little is known about the circumstances or locations of their lynchings. Rawls was accused of murdering a white merchant in 1895. While Rawls awaited a trial, a white mob stormed the jail, dragging him out and hanging him. No one was ever charged for the lynching.

Rev. A.S.J Allen was a well-respected black minister. On April 2, 1904 he got into an argument with his white neighbor about placement of a fence and the neighbor shot Allen dead. The courts exonerated the neighbor and charges were never filed. However, Allen’s regional and national stature led to numerous black communities going into mourning and 800 people attended his funeral.

Ceremony attendees placed a cup of soil into empty mason jars arranged before the podium. Each jar displayed the name of a victim with two jars for each individual. One jar will be stored at the Equal Justice Initiative Museum in Montgomery, Alabama while the other will stay in Alachua.

One by one, a long line of people solemnly put a cup of dirt into each jar until it was filled and sealed. The jars that go to the Equal Justice Initiative Museum will form part of a wall of remembrance made entirely of soil jars from where these victims died or were interred.