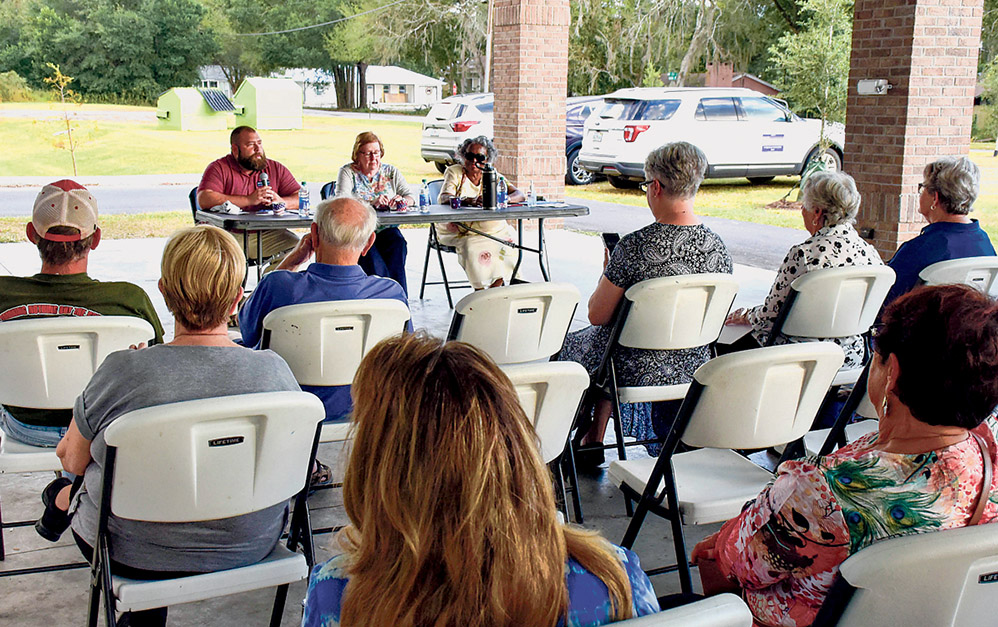 HIGH SPRINGS ‒ With the High Springs municipal election set for Election Day Nov. 8, three candidates are vying for one seat on the High Springs City Commission. Seat 3 is currently held by incumbent Linda Jones, who is seeking her third three-year term as a city commissioner. Jones ran unopposed in two prior elections, but this election cycle she has two opponents vying for the seat she currently holds—Tristan Grunder and Eyvonne Andrews.

On Oct. 25, the GFWC High Springs New Century Woman's Club hosted a public forum for the community to meet the three candidates and to enable voters to hear the candidates and question them about important issues in the Nov. 8 election.

Moderator Vickie Cox introduced each candidate and allowed each a two-minute introduction to talk about their backgrounds and plans for the Commission if elected.

Tristan Grunder is a lifelong resident of High Springs. A decorated law enforcement officer of 15 years, Grunder worked with the Gainesville Police Department (GPD) on the gang and special operations units. In 2015, he transferred to the Criminal Investigations Division, working robberies and homicides. In December 2017, he was selected as Acting Sergeant in the Operations Division. Grunder is also a member of the Negotiation Response Team and is the president of the Fraternal Order of Police.

Eyvonne Andrews is also a lifelong resident of High Springs and is the former President of the Chamber of Commerce. She also worked with the Alachua Sherriff’s Office (ASO) Inmate Trust Fund from 1988-2004.

Incumbent Linda Jones is the former Vice Mayor of High Springs. She was born in DeLand and moved to Gainesville in 1959. Jones attended JJ Finley Elementary, Westwood Junior High and graduated in 1966 from Gainesville High School. Jones and her husband moved to High Springs in 2007. She has worked on the campaigns of four successful commissioners and was on the City Charter review in spring 2016 when she decided to run for City Commission. Jones ran unopposed in the November 2016 and 2019 elections.

Moderator Cox asked each candidate four questions about the issues they felt were important with much of the discussion focused on growth and infrastructure, which is a growing concern with many High Springs residents.

Grunder stressed his deep-rooted involvement in the community and raising his family in High Springs. Grunder wants High Springs to retain its small-town heritage, but he also recognizes the need for responsible growth and funding for additional infrastructure. He plans to work with City staff to create a long-term strategic plan and is aware of the need to keep the public informed on all decision that affect the community. Grunder maintains he will study the details on any decision and will be honest in educating the public on all sides of City decisions. Grunder said that as a family man and police officer, safety for the community is also of vital importance and he will continue advocating for first responders.

Andrews’ main concern involves maintaining and improving infrastructure in the community, especially road repairs and the increasing traffic. Andrews also stated a need for better internet for the entire community with reasonable rates and reliable service. Another concern is to provide more elder care and senior activities.

Jones expressed her desire to win another term to finish many of the issues that are still in progress within the Commission. She discussed her opposition to the Wall Dogs Murals and increasing growth in High Springs as well as her voting record on issues involving growth. While she voted against two large housing projects, Bailey Estates and Tara Meadows, she did vote in favor of Bridlewood and Fair Oaks subdivisions. She supported purchasing the Canoe Outpost and Crockett Springs as well as support for the proposed solar farm. Jones is also advocating for Alachua County Commission single member districts, an issue that will be decided by a voter referendum on Nov. 8.

Each candidate offered a two-minute closing statement and then mingled with audience members.