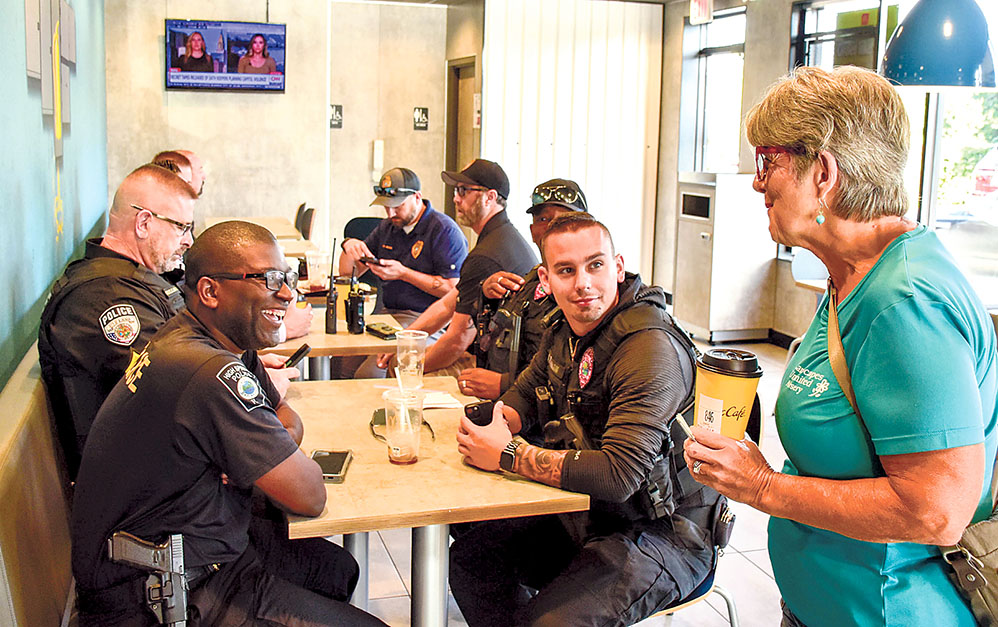 ALACHUA ‒ Police officers from both the Alachua and High Springs Police departments converged at the Alachua McDonalds restaurant on Oct. 5. The early morning gathering wasn’t the result of a disturbance, no crime had been committed, and they weren't serving up tickets. They were there to celebrate the annual event known as Coffee with a Cop.

The event is part of a nationwide program that helps police officers interact with the citizens they protect and build better communications with the community. Typical encounters between the police and citizens happen when they are called for assistance or pulled over by a patrol officer. These interactions are often stressful and confrontational, which puts the officers in a situation where he or she is seen as an authority figure, and not as a fellow human being. The idea behind the program is to allow an environment where the public and the police officers can interact over a cup of coffee on a personal level and where the public can ask any questions they may have about the department or policies.

The program was started in 2011 in Hawthorne, California, by the local police department. At the time they were trying to restructure their department to a more community-oriented model where the officers worked within the community, so there was a familiarity between officers and the people they protected. As they considered ways of building community trust, it was suggested that maybe a simple idea like sitting down at a local coffee house could allow officers to interact in a more casual way with the citizens It could also have the benefit of putting a human face on the person behind the badge.

Several years ago, the Alachua McDonalds learned about the program and approached the Alachua Police Department to see if they would be interested in partnering and hosting Coffee with a Cop. The event has happened every year since, except when the COVID-19 pandemic hit, and the event was canceled in 2020 and 2021.

The Alachua Police Department revived the annual get together this year. Officers, including High Springs Chief Antione Sheppard, chatted with customers, discussing current issues and learning about each other.

“COVID has disrupted many events, including this one, but we want to bring it back,” said Sheppard. “Positive interaction with our community is important and we want to keep people aware that the police force is there for them.”