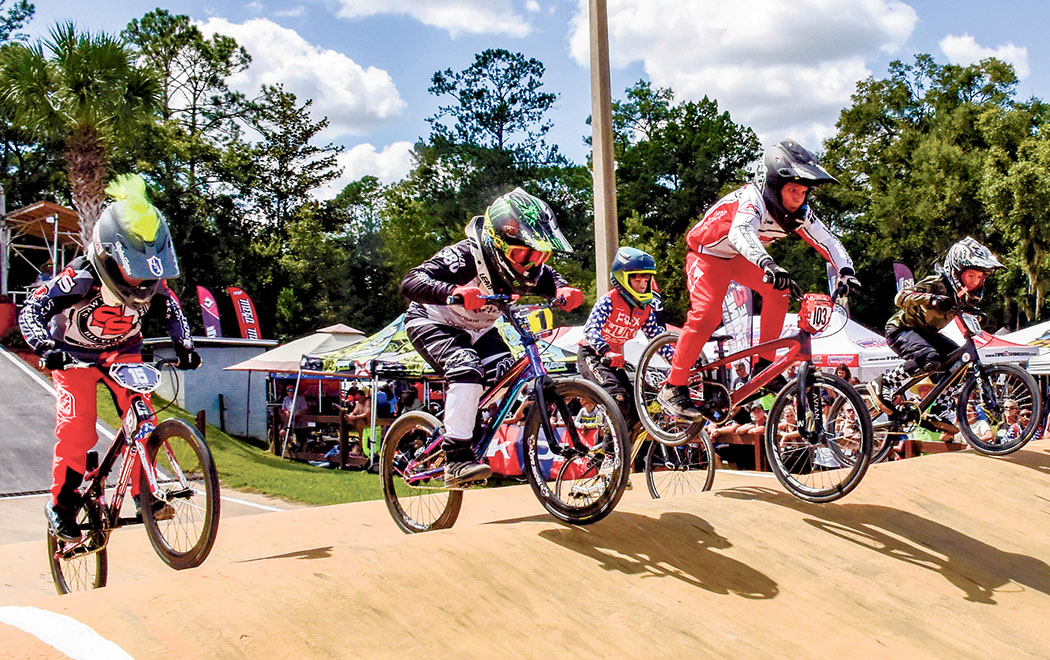 HIGH SPRINGS ‒ This past weekend the High Springs BMX track became the first track in Florida to host the Southeast Region Gold Cup Series finals competition on Sept. 23-25. The national DK Bikes sanctioned competition brought BMX riders from throughout the southeast including Florida, Georgia, Alabama, Mississippi, Tennessee and the Carolinas, with nearly 700 riders and over 2,000 spectators, making it the largest Gold Cup event this year.

To reach the Gold Cup finals, riders count their best two scores from Gold Cup Qualifiers in a region and by racing both Saturday and Sunday of the Gold Cup Championship Final in that same region. In addition to awarding a Gold Cup jacket and #1 plate to the winner in each pointed age and skill level, winners are also awarded Gold Cup #2 and #3 plates.

The off-road bicycle competition includes up to eight riders on a serpentine single lap clay track that includes jumps and large banked turns. The bikes are single gear, with two classifications based on either a 20- or 24-inch wheel size. Since the 1960s BMX has gained popularity around the world and in 2008 it was officially sanctioned as an Olympic sport.

The High Springs track was built in 2002 by the City of High Springs and a partnership with local volunteers to provide youth and family-friendly sporting in the area. The track is managed by John and Laura Pringle who are both BMX racers along with their two daughters. But to Laura Pringle it's not the competition that's important. It's the family orientated spirit among the BMX community.

“Many times, the parents will come to watch their kids race and wind up doing it themselves,” said Pringle. “You don't see too many sports where parents participate with their kids.”

Pringle says they have been successful in helping expand the sport in the region since the track opened and lobbied to bring the Gold Cup series to the High Springs track. “We’ve been working for about six years with the sanctioning body, the Gainesville Sports Commission and Visit Gainesville,” said Pringle. “There are 22 sanctioned tracks in Florida and over 40 in the southwest region.” She said many of those tracks were competing to host this event and High Springs offered a central location for the region. “BMX riders and families are willing to do a day’s drive to compete in the larger events,” said Pringle.

Pringle credits partnerships with making High Springs the site of the Southeast Region Gold Cup Series finals. “We couldn't have made this happen without the support of all the community volunteers, along with the City and the High Springs Parks and Recreation Department who provided the infrastructure and extra land for this big event.”

Pringle says the event is a positive contribution to the local economy, bringing revenue for businesses with the influx of visitors. The City provided parking for a $20 fee and a $75 weekend camping area fee for the event. In addition to generating business for local businesses, the track had two food concession trailers on site, Kickstand Cafe and Char Bar, which offered breakfast, lunch and dinner options.

Competitions started Saturday at 11:30 a.m. and 8 a.m. on Sunday with final winners announced at the end of the day on Sunday. “It turned out well and bigger than we expected,” said Pringle. “It was also a great opportunity for the BMX community from all over the region to get together to compete, have fun and make new friends.”