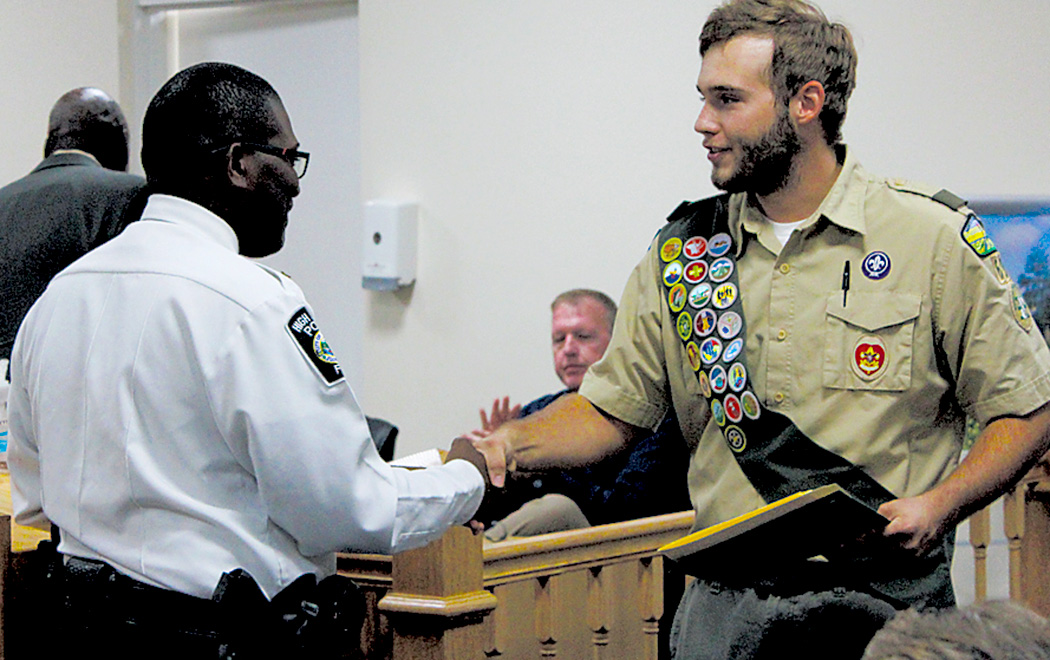 HIGH SPRINGS ‒ Zachary Hodge, 18, was honored during the Sept. 8 City of High Springs Commission meeting for achieving the rank of Eagle Scout. Hodge has been a member of High Springs Troop #69 for some five years. Scout Master Kathy Bloodsworth describes Hodge as “a real leader in the community and a good student.”

Hodge, who is a senior at Santa Fe High School, is considering going into the Navy after graduation. After that he is considering becoming a game warden or going into welding, but has ample time to consider his options.

Hodge and his team of helpers were able to increase the area of the outdoor classroom with some tractor work and also repaired the benches. “Younger Scouts water sealed the benches as they were repaired,” said Bloodsworth. The group of five Boy Scouts and eight adults cut up limbs, cut grass, fixed fences around the cemetery and chain sawed and removed a large branch that had fallen into the cemetery.

According to Bloodsworth, the Eagle Scout project involves obtaining funding for the project, if needed, obtaining and overseeing personnel to do the work and generally managing the project start to finish.

In all, the project took approximately 5.5 hours of on-site work to accomplish.

Eagle Scout is the highest rank a young person can reach in Scouting. In fact, only around five percent of all scouts who join ever reach the Eagle rank. Becoming an Eagle Scout is an exceptionally difficult challenge, even for scouts who can complete merit badges and rank requirements quickly.

“A lot of leadership skills and earning 21 merit badges are what is required in order to qualify to do an Eagle Scout project,” said Bloodsworth. “It is not easily accomplished,” she said.

When asked about the benefits of achieving the rank of Eagle Scout Bloodsworth said, “Eagle Scouts that join any branch of the military start at a higher rank than those who do not have the Eagle Scout designation. Higher rank means higher pay. If an Eagle Scout desires to pursue a career in the military, they'll begin as an E-3 instead of an E-1. In addition,” she said, “most college admissions officers recognize the Eagle Scout as an exceptional achievement. It can give the Scout an advantage over other applicants.”

Hodge and the other members of his troop were present to lead the pledge of allegiance at the opening of the City Commission meeting and Hodge received a round of applause for his accomplishment.