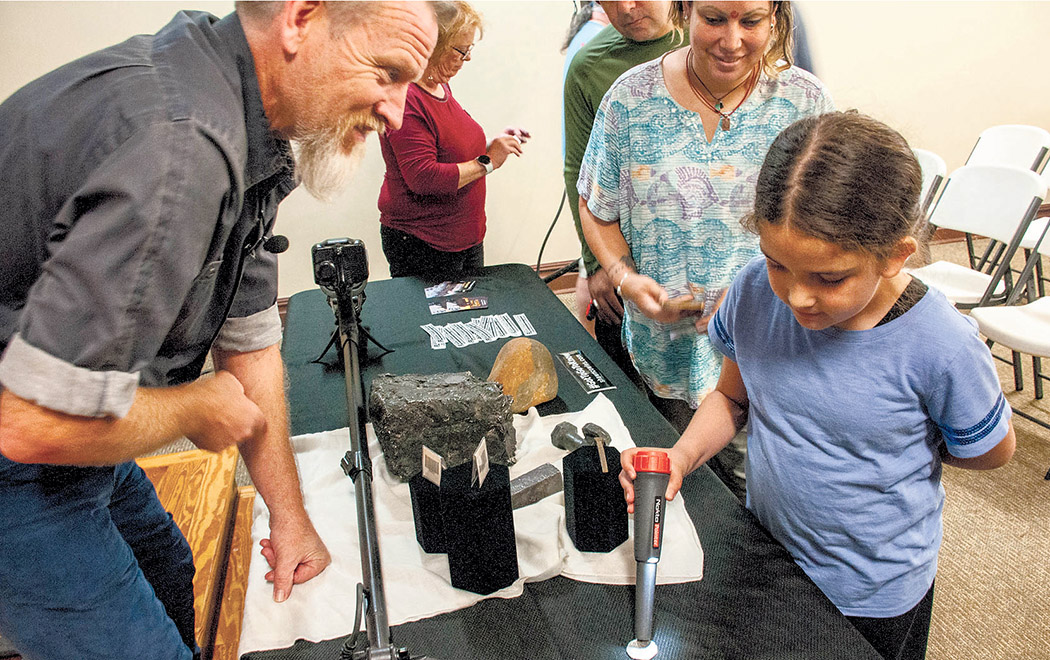 HIGH SPRINGS ‒ Almost every kid dreams of being a treasure hunter at some time in their childhood. Hollywood fosters that dream with movies such as Indiana Jones and National Treasure that portray treasure hunters as larger than life characters on dangerous missions that result in successful quests to find fabled treasure. In real life, few of us will ever realize that dream or find any treasure.

But for Shawn Cowles, treasure hunting and adventure in faraway lands is a lifelong career. On April 21, he shared his adventures through a lecture at the High Springs Museum to a packed crowd. On as table next to him he displayed the tools of his trade and examples of the treasures he has found including a large black mass of silver coins found in the most famous treasure find in modern times.

He worked for the Mel Fisher organization on Florida’s 1622 fleet shipwrecks, Atocha and Santa Margarita, where he helped recover $420 million worth of gold, silver and jewels. As an independent consultant and diver, Cowles has been involved with prominent land find and shipwreck projects in North America, South America, and the Pacific Ocean. Some, like Guam’s Nuestra Senora del Pilar, were in waters up to 350 feet deep, using mixed gas and closed-circuit technology. He has been searching for treasure since the age of 21.

His passion for treasure hunting began as a child when he and his father were renovating their ancestral home and Cowles found a 300-year-old coin from 1798. From then on treasure hunting became his passion and career. After college he tried his hand in the music industry, eventually winding up in Key West, Florida. He was also a trained diver and ended up joining Fisher's expedition on one of the biggest treasure finds in history.

Over the years, Cowles also worked as a consultant on several treasure expeditions and became a consultant for Discovery Channels Treasure Quest show for two seasons searching for a possible treasure in the Bolivian mountains at Sacambaya. The legend is that Jesuit Priests buried a vast amount of treasure somewhere in the valley that is estimated to be worth $2 billion.

Cowles’ knowledge led him to become the featured star of the show in the 3rd season in 2019. “The environment in the Bolivian Mountains is pretty extreme and remote, so the crew had to travel light while still having the necessary tools to identify any possible locations,” said Cowles. Although they used five tools, the main tool was a metal detector that could identify metal deposits underground.

“We also used lightweight Ground Penetrating Radar (GPR) to look for caverns or empty spaces that could be vaults,” said Cowles. “Any metals we found were then checked with an alloy tester to see the composition of the metal.”

The expedition was stationed at Sacambaya a for six months and made significant finds, but not the motherlode—yet. Season 4 has been put on hold due to the COVID pandemic, but Cowles believes they are close to finding the fabled treasure.

Although treasure hunting is a career, adventure and travel are a way of life for Cowles and his wife, Adele Williams. Originally from Australia, Williams is a motorbike enthusiast whose quest for adventure and travel matches that of her husband and they have traveled extensively including several cross-country trips on their motor bikes. After season 3 ended, they took their dirt bikes on a grand adventure traveling from Key West to Bolivia.

“I figured that this would put us down in Bolivia prior to season 4 and give is a chance to travel, interact with local people along the way and hear their history and legends,” said Cowles. “We are both very interested in hearing people’s stories and culture.”

By the time they reached Bolivia, the pandemic had put the whole world in quarantine and they were stuck in Bolivia for 40 days. They wound up leaving their motorbikes there and flying back to the United States. With their Key West house rented, they hit the road in an RV and traveled America. As they returned to Florida at the end of their trip, they stopped in High Springs.

“We instantly fell in love with this area,” sad Cowles. They were attracted to the friendly people with a small-town attitude of community and the beautiful landscape. “Adele is also into horses so we wound up deciding to stay and buy a farm that also had room to expand to a B&B, said Cowles. The couple still plans to travel, but High Springs has become their home. “I may be a treasure hunter, but this area is a treasure in itself,” Cowles said.