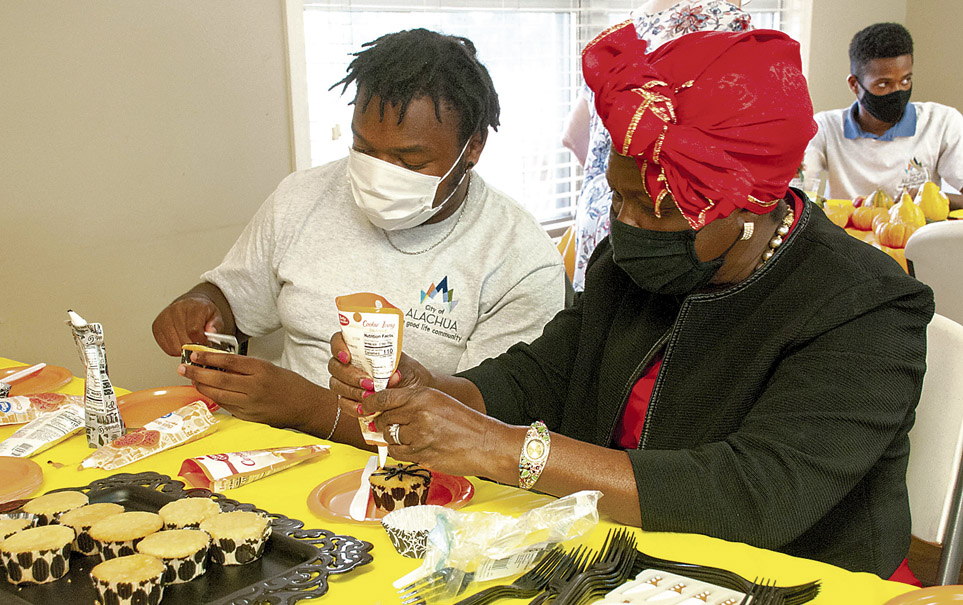 ALACHUA ‒ Octoberfest usually conjures up images of beer gardens with quantities of bratwurst and German beers. But the City of Alachua-sponsored first-ever Octoberfest at the Cleather Hathcock Community Center wasn't the typical celebration centered around beer and German food. Instead, it was a chance for seniors and teens to celebrate fall, decorate pumpkins, cupcakes and pumpkin bread while bridging the generation gap.

The pandemic has been especially hard on seniors as they are at a higher risk of serious illness from COVID-19. Over the duration of the pandemic, seniors have stayed indoors more than usual, depending on family and circles of friends for support. Octoberfest at the Cleather Hathcock Community Center offered an opportunity to visit with other seniors and teenagers from the City of Alachua Youth Advisory Council (YAC). For the youth, it was a chance to glean historic insights and experiences from a different generation.

Alachua City Deputy Clerk LeAnne Williams works with the YAC and the Senior Resource Board (SRB), both organizations having goals of giving support and addressing issues affecting their respective age groups.

In January 2021, the YAC began a project to help foster care children and Williams suggested meeting with SRB members to find out if they would like to get involved. The seniors were thrilled to join in the project, not only to work with the foster kids but also as a chance to get out in the community with a purpose.

“We're lonely and feel isolated,” seniors told them. “We want to get back out and interact with our community.”

“It benefited both groups in unique ways. For the seniors, it gave them people to enjoy experiences and conversation with,” said Williams. “It also provided them a way to pass on a lifetime of experience and stories that might otherwise be forgotten.

“For the teens, it gave them an opportunity to get to know and learn from a generation that is history to them. At least one generation separates the two from their view of the world. Except interactions within their own family with grandparents and great grandparents or what they learn in school, they have limited perceptions of what life was like before,” Williams said.

Alachua is sponsoring a number of cross-generational events. The first was a bingo night in June, which Williams says was a great success. Octoberfest is the second, then a Christmas Caroling event and Bingo in December and a High Tea in the spring.

At the Octoberfest event, each teen was paired with a senior to encourage interaction. “The painting and decorating takes time so they had plenty of time to talk,” said Williams. “We also provided the teens with five questions to ask the seniors, both to learn from them and give the seniors an opportunity to reflect back on their lives and experiences.”

Williams says the questions were meant to provoke conversation—not short answers. Seniors were asked questions such as “What was your greatest accomplishment?” “What was the hardest thing you went through?” “What event affected you most?” and “How has Alachua (or the world) changed in your lifetime?”

The questions allowed the seniors to share their own stories and gave the young people an opportunity to learn about the past from the perspective of people who lived it.

Williams said, “If the stories aren't shared, they are lost forever.”