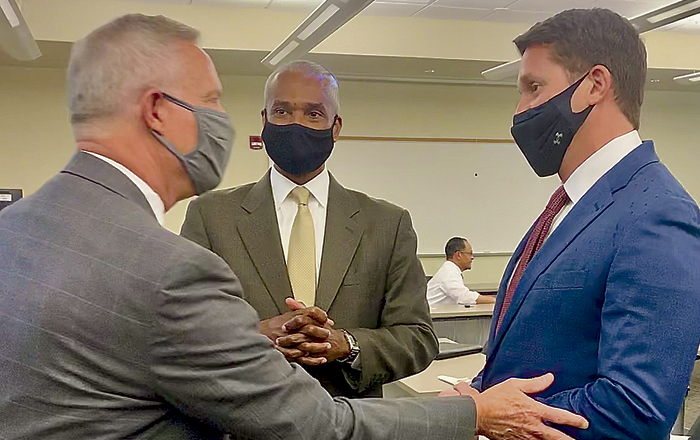 ALACHUA – Alachua’s thriving biotech community is on a mission to increase its presence on the national and global stage. Biotech leaders and community partners welcomed Florida Department of Economic Opportunity (DEO) Secretary Dane Eagle on Wednesday, June 2 at the Santa Fe College Perry Center for Emerging Technology. Eagle was appointed by Governor Ron DeSantis to lead the State’s economic development agency in 2020.

Discussion centered on the factors that make a biotech community grow and thrive. Participants pointed out that important attributes include an available workforce, proximity to higher learning, startup friendly environments, access to venture capital and a quality lifestyle.

There was general agreement by participants that the State of Florida could encourage growth in the biotech industry by supporting measures that boost angel, venture capital, and other funding for biotech and biomed companies as well as offering incentives tailored to the biotech industry in order to be competitive with other states such as Massachusetts, California and North Carolina. Another area identified that the State could assist with is funding for building and site development to support construction of new facilities, or reuse or expand existing facilities.

Locally, the City of Alachua is launching the Alachua Biotech Partnership, a public-private partnership to help grow existing companies and expand the area’s biotech ecosystem. It was suggested that DEO become a member of the partnership. Clemons suggested starting a biotech caucus to further discussion and strengthen the biotech sector.

Eagle offered several suggestions regarding possible funding opportunities through the Department of Economic Opportunity and advised that some measures mentioned would require legislative action. It is expected that Eagle will return to the area in the near future to tour local facilities.