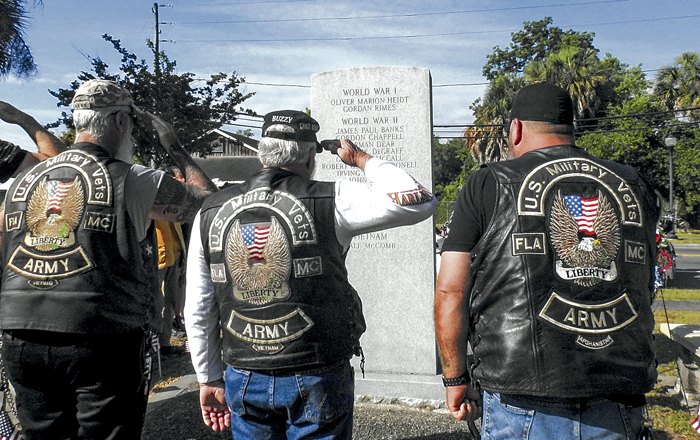 HIGH SPRINGS ‒ Like many small towns, High Springs has a monument honoring local citizens who gave their lives in wartime. Located just west of City Hall on U.S. Highway 27, the monument lists the name of the ones who never returned from World Wars I and II as well as one reserved for as Vietnam vets. World War II hit High Springs hard as 14 young men did not come home out of a town population of 2,000.

For many Americans, Memorial Day is a three-day weekend to travel, enjoy the outdoors or party. The original meaning of the holiday may be acknowledged, but oftentimes little is done to honor it during their weekend plans. For others, the true meaning of Memorial Day carries a more somber quality as a time to remember those who served and did not return, as well as those who came back but have since passed.

Over the years, those monuments in High Springs became part of the town's landscape, seen by many, with few paying heed to meaning or purpose. Four years ago, vandals destroyed one of the benches that flanked the stone memorial. The U.S. Military Vets motorcycle club stepped forward to fix the bench and clean up the site. The group is part of a national organization with over 100 chapters throughout the country.

The clubs are entirely comprised of honorably discharged veterans from one of the five military branches and who also are motorcycle riders. They are a nonprofit group that also offers support and funding to veteran related groups and charities. Their goal is to honor and keep the memory alive for all who served, especially those that paid the supreme price of their lives.

This year, on Memorial Day the bikers showed up at the memorial, joined by the High Springs Lions Club for their annual tribute to those who did not return by laying wreaths and planting small flags in tribute for each of the 17 names on the monument. While this has been an annual event, it was cancelled last year due to the pandemic, but the supporters were anxious to get back to the ceremony and honor the fallen.

They were joined by a few citizens including Ervin Hiney, 88, and his wife Shirley of Alachua. “I enlisted at age 18 and served in the United States Air Force for 20 years. Most of my career I flew fighter planes as well as the B-52 bomber in Vietnam,” said Hinley. “I flew fighters in during the Korean War. We just wanted to come honor fellow servicemen that gave their lives for their country.”

At 9 a.m., veteran and vice president of the U.S. Military Vets Spike Mueller rang a bell and announced the Unknown Soldier. A club member solemnly placed a flag in the ground on the monument's edge. One by one, Mueller spoke the names on the monument and a member of the vet’s club or Lions Club placed a flag in their honor. After all names had been read, a final salute and moment of silence was given.

“We are all veterans who served, and in many cases lost friends and comrades in war,” said Mueller. “We never forget them and want to make sure they are honored and remembered.”

The monument is inscribed with the message "In honor of those who served in time of war, A mighty mother turns in tears, the pages of her battle years, lamenting all her fallen sons."

For Lion's Club member Leslie Flage, the ceremony held a personal importance. Her Great Uncle Robert McDonnell was one of the names on the stone. Flage never met her great uncle, but grew up hearing stories and saw the sadness in his family's eyes.

McDonnell was a local high school valedictorian who split his free time between his girlfriend and camping on the rivers and was popular in town. When World War II came, he and three brothers all joined up. All lived through the war except Robert.

Just a month before the end of the war in Europe, Robert’s P-51 fighter was shot down over Holland. Originally buried in Holland, his family had him returned to his hometown to be buried in the High Springs cemetery.

And at that cemetery on Memorial Day, John Marshall was cleaning his son, John Isbell's, gravesite, which has a Marine flag flying above the grave. Marshall served in the Navy and both his sons were Marines in Desert Storm. Although Isbell died after his tour, his father routinely maintains the grave and felt that Memorial Day was an important day to come. “I like to keep the site tidy to honor John and his service to the country,” said Marshall.

At Alachua’s City Hall is a military memorial surrounded by a pathway of bricks, each inscribed with a veteran's name and time of service. Some are names of veterans still living and some are veterans who passed later in life, but 48 are of Alachua County residents killed in Vietnam and nine are from Iraq and Afghanistan.

One of those who died in Afghanistan is Staff Sargent John Rieners. On the day before Valentine’s Day 2010, Rieners and three other soldiers were killed by a suicide bomber on a motorcycle.

When a soldier deploys to a combat zone, his mother becomes a member of the Blue Star Club signifying they have a son or daughter in harm’s way. John’s mother, Ronna Jackson, was a proud member of that club, but at his death she joined the club no mother wants, becoming a gold star mother, signifying she lost a family member in action.

While the loss of her son was devastating, Jackson found a cause and a way to keep part of her son alive in memory. Jackson put her energy into organizations to help other deployed soldiers. Jackson works tirelessly with various veterans’ organizations including The Military Support Group of Alachua County (MSGFAC). The group sends monthly care packages to deployed soldiers to provide items they can’t find in the field to make their lives a little easier and remind them of home.

This past Saturday the MSGFAC met at Evergreen Cemetery to place 1,000 flags on veteran’s graves, then to Publix to distribute 'Poppy's for the Fallen” with the local American Legion Auxiliary ladies. These tributes are to remind people what this day is about.

“We owe our freedom in America to these heroes that are willing to risk their lives to defend people they do not even know, but are fellow Americans. Our current troops are all volunteers, who give up their civilian life to serve their country. What we do is a small way to say thank you, said Jackson. “They are all heroes and all that I do is in the name of my son, to honor his memory and help the other soldiers who still serve.”