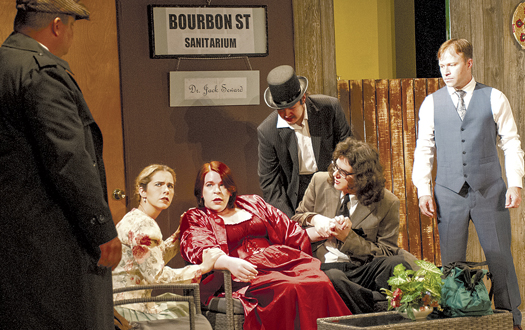 HIGH SPRINGS ‒ The COVID- 19 Pandemic has had a huge impact on the performing arts, as it has throughout all of the arts and entertainment industry. Due to physical distancing requirements, limited occupancy and closure of physical venues, which has halted not only public performances but rehearsals as well, there are few live performances to enjoy.

Live musical performances in indoor spaces have all been canceled. Millions of musicians are affected by club, wedding, birthday, and numerous corporate events that have been canceled or postponed until 2021. All Broadway theatres in New York have been closed until January 2021. Many movie theaters, including the Priest Theater in High Springs and Regal Cinemas in Gainesville have shut down since there are few new movies being produced, and limited seating capacity has made it unprofitable to stay open.

For the Priest Theater, the closure is permanent. One of the oldest movie houses in Florida, the Priest Theater was built around 1910 by W.J. Priest, who owned the Ford dealership in High Springs. It was originally used for Vaudeville shows, but transitioned to silent films before becoming a movie theater. Regal Cinemas movie theaters across the nation, including Gainesville’s three theaters, located at Butler Town Center, Regal Royal Park and Regal Celebration Pointe, have temporally shut down less than seven weeks after they reopened for the first time since the beginning of the COVID-19 pandemic. They are the only theaters to offer first-run movies in Gainesville.

For live theater in the area, the situation is just as grim. Gainesville Community Playhouse is postponing upcoming productions and the Hippodrome Theater in Gainesville plans to stream its next event online. The Performing Arts Center at the University of Florida has canceled all shows until this month, and those are still subject to cancellation, and are limiting new shows to two a month. Live performance of music and theater gives people a chance to enjoy the arts, be entertained and forget about their problems for a few hours.

There is only one theater in the area that is performing live shows, and that is the High Springs Playhouse.

The High Springs Playhouse (HSP) was founded as a community theater 27 years ago, using local actors and directors. They have been at its current location, an old church, for 20 years. For those 27 years, the community theater has produced an average of six shows a year. “We have a board comprised of staff, directors and actors that help us pick the shows and always welcomes suggestions from our audience,” said Julie Macklin, President of the HSP board. “Demographically our audience tends to be older or families, so we gear our shows to that and try to stay family friendly. We have found the audience really likes comedies, so that is what many of our shows are.”

The theater was shut down by the pandemic for about two months. That time was used to renovate, clean and repair the theater. They also put in a new air conditioning system to help distribute the air better. “We clean everything between shows,” Macklin added.

“As much as the director and actors want to put on a show, the audience wants it, too. People are excited to get out of the house and do something,” Macklin said.

HSP opened during phase 1in July with “Ann of Green Gables” at 25 percent capacity. “We are now in Phase 3 of the Governor's plan, which allows for total capacity and no mask requirement, but we want to be responsible and protect our audience,” said Macklin. They remain at 75 percent capacity and ask everyone to wear masks.

Dracula is currently showing with an adaptation of Bram Stoker’s classic thriller set in the French Quarter of New Orleans at the beginning of the jazz age. It begins with a European count moving into a dilapidated mansion behind Dr. Seward’s family home. The entire Seward family and spouses live at the house and soon become entangled with Dracula as one after another becomes a victim or unwilling helper to the count.

Maid Pipi Laveaux, played by Renna Tenbroeck, steals several scenes with her Cajun accent and voodoo rituals, while Mina Harker, played by Mollie Lassiter, Lucy Weston played by Angelica Miller, and Aunt Quincy played by Taegan Reiter, fall under the dashing Count Alucard's spell. Mrs. Renfield, played by Skyeler Montgomery, is harder for the Count to tame and knows his secrets but is too terrified to tell. Count Alucard, played by Griffin Green in his debut performance on the stage, plays his role well, regally entering, sometimes seemingly from nowhere, dressed in black, complete with a cape.

Dr. Seward calls on one of his respected medical colleagues, Dr. Abraham Van Helsing, played by Miguel Miranda for help. The baffled men of the house, Jonathon Harker, played by Andy Jean, Arthur Holmwood, played by Alexander Ray, and Dr. Jack Seward, played by Ryan Ray, join forces with Helsing to take charge, as a race to save Mina Harker from the Count heats up.

The performance runs with three shows a weekend until Oct. 25, with evening shows starting at 8 p.m. on Friday and Saturday and a matinee show on Sunday at 2 p.m. Tickets can be purchased at the playhouse website at https://highspringsplayhouse.com/