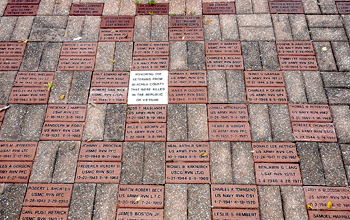 ALACHUA ‒ When war strikes, everyday citizens have taken up arms to defend others, often putting their lives on the line. While most return to civilian life, some pay the ultimate price. Alachua County has had volunteers serve and die in every war since World War I. During the Vietnam War, 48 troops did not return alive, but they are not forgotten, especially by their brothers in arms who did return to live a full life. The Alachua City Commission on Aug. 10, paid homage to veteran Hurl “Butch” Mullins, who dedicated much of his life to fellow veterans.

Mullins was instrumental in assisting two veterans organizations that worked to erect a lasting monument to those Alachua County soldiers who did not return from Vietnam. The Marine Corps League,990 Chapter and the Vietnam Veterans of America Chapter 1092 worked with the City of Alachua to build a pathway of bricks in front of City Hall inscribed with the names, rank and birth/death dates of those 48 men.

Mullins was one of the men who served in Vietnam and was a member of both organizations. He was born in Charleston, West Virginia, and joined the Army straight out of high school during the Vietnam War era. After his tour in Vietnam Mullins returned home, living in Alachua County and began a career as a stonemason for the next 50 years.

When the brick project was approved, Mullins volunteered his services as a brick mason to lay out the walkway a no cost. It was no small task, laying out thousands of bricks in an intricate pattern to cross the driveway in front of City Hall, but Mullins accepted the challenge in honor his fellow soldiers.

On Dec. 9, 2019 a ceremony was held in front of City Hall to dedicate the finished walkway Mullins had built to honor fallen comrades. In the center of the intricate brick path those 48 names are on individual bricks, two names to a group, on horizontal bricks which are then spaced two blank bricks apart for the next group. The path contains thousands of bricks, and since that December day, many living veterans have purchased bricks in their names to help cover the cost of the project. In a show of unity and to honor those who lost their lives, the living veterans bricks, which number over 100, are arranged around the 48 veterans who perished.

Honoring the men who paid the ultimate price is not limited to bricks. Forrest Hope, president of the local Vietnam Veterans of America, believes that for people to appreciate that these long-gone soldiers were real people, there should be a visual element complete with the faces and stories of each man.

Hope has collected 45 of the men's photos, stories and information on their burial places, and he expects to complete the project soon. There is a saying that a person dies twice. First at their physical death and the final time when their name is remembered for the last time. This memorial ensures these men who gave all continue to be remembered

For “Butch” Mullins, dedication to veterans causes and vets in need covered much more than just the brick memorial. Throughout his life he has helped veterans in need, especially those who returned with mental scars and PTSD from the trauma they had experienced. He was active in fundraisers and veterans events.

He also volunteered at the New River Correctional Center, counseling incarcerated veterans, many who were imprisoned, often for their inability to adjust to life at home and wound up in prison for violent acts or drug use. Mullins counseled them on a variety of subjects aimed at helping them get back on their feet once released.

“The inmates loved him,” said Alachua City Commissioner Robert Wilford. A veteran himself, Wilford had known and worked with Mullins for years in veterans projects. “Butch accepted people for who they were with no judgments or preconditions,” said Wilford. “He always put other people first and was there for them when they needed help.”

Due to his work with both the inmates and the brick path, the City of Alachua planned to honor Mullins with a ceremony at a Commission meeting. But on Saturday, Aug. 8, 2020, Mullins joined those 48 men. He died from complications of liver cancer.