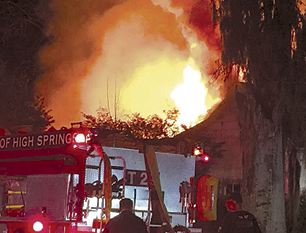 HIGH SPRINGS — At 7:50 p.m. on Jan. 8, 2020 the High Springs Fire Department (HSFD) received a call about a house fire off of Poe Springs Road. Upon arrival, the firefighters found the inside of the house fully engulfed. It was an older house built in the 1920s and heavy smoke was pouring from the structure. The first concern was whether anyone was inside.

The most dangerous part of a firefighter’s job is if they have to enter a burning, smoke-filled building to try and find a victim. Visibility is poor, the fire can erupt in sudden bursts and the structure itself can be weakened to the point of collapse. As other units from Newberry (NFD) and the Alachua County Fire Department arrived to assist, the HSPD prepared to enter to search for victims. However, the owners of the house arrived and informed the firefighters that the house was unoccupied and was being used for storage.

The HSFD then went to what they refer to as defensive mode, which avoids a dangerous entry and concentrates on containing the fire and limiting structural damage. The items stored in the house added fuel to the fire and it took almost two hours to totally extinguish the flames, followed by a two-to-three-hour search to make sure there were no smoldering hot spots that could rekindle the blaze. While no one was injured and the structure was stable, the damage to the interior was extensive.

The HFSD handles about 66 fire calls a year, with house fires being the least predictable and the most dangerous if firefighters have to try and rescue trapped victims. According to HSFD Communications Director Kevin Mangan, while damaging house fires have declined nationwide due to better smoke detectors, they have also become more dangerous for both the residents and firefighters. Older buildings with solid wood construction or brick walls tend to burn slower than modern buildings that have more use of plastics both in the construction of the house and the furniture and appliances inside. “Forty years ago, the average was 15 minutes escape time from a burning house. Now it is less than five minutes and plastic items put off more toxic heavy smoke,” Mangan stated.

The fire department recommends that all residents have an escape route planned for the family in advance and practice it so they can get out, if necessary, in a short period of time.