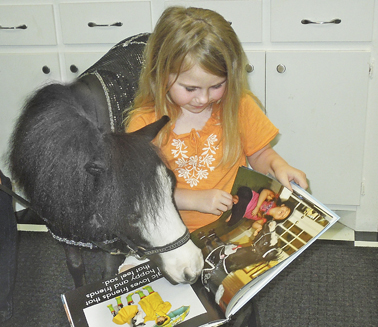 Therapy horse Magic reads with Taylor Kimmel, a tornado survivor from Briarwood Elementary School in Moore, OK. Taylor's father Toby Kimmel was driving to the school to pick up his first grader when he saw the tornado destroy the school.

HIGH SPRINGS – Debbie and Jorge Garcia-Bengochea and their troop of three therapy horses narrowly escaped the onslaught of five tornadoes heading toward Oklahoma City and Moore, Okla. on Friday, May 31, 2013.

The group was in Moore visiting with children who had been in schools hit by the devastating May 20, 2013, category EF5 tornado with wind speeds of 200-210 mph. The Gentle Carousel Horses had been asked by hospital personnel and affected families to come to Moore to visit with some of the children.

With at least five more tornadoes building in the area, the Garcia-Bengocheas evacuated their horses in a successful attempt to outrun the building storms. Debbie Garcia-Bengochea, a former school principal, said in a telephone interview, “The place where the horses were staying and the surrounding area were destroyed. We had to evacuate with the horses in front of the storm because it was too dangerous to stay any longer.”

They left the area just in time as the tornadoes hit the hotel they were staying in about 30 minutes after they fled. “With five tornadoes going at the same time, it was hard to know which way to go,” she said. “We knew we couldn’t stay at the hotel after checking with hotel management and hearing they had no safe area or emergency plan. They just had people pull mattresses into the hallway to cover up,” she said. The hotel was badly damaged when they returned to Moore after the tornadoes had passed.

With all the devastation, hotels and churches that were left standing were housing children during the day. “We met with them [children] wherever there was a safe place they were staying in for the day,” she said.

The couple stayed until late Saturday night, June 1, 2013. They loaded the horses in the trailer and arrived at St. Jude’s Children’s Research Hospital in Memphis, Tenn. Monday. Tuesday the horses rested and exercised at a Nashville farm. On Wednesday, June 5, the horses visited children at Monroe Carell Jr. Children’s Hospital at Vanderbilt, Nashville, Tenn.

The group is currently en route back home to High Springs.

“This was another unplanned trip for the Gentle Carousel Horses,” said Debbie Garcia-Bengochea. “After receiving several phone calls and requests by the people in Moore, we just couldn’t not go,” she said. “There was no time to raise money for the trip, so we’re operating in the red again.” This is a situation the group finds themselves in almost monthly.

Following the Sandy Hook/Newtown, Conn., trip earlier this year, the couple worked with counselors to create a book called, “Magic Loves Me” with photos of the horses which were taken by the couple. They have used the book to work with children who desperately need to heal and have found it quite helpful. All of the children want to keep the book, but the couple hasn’t had the money to get the book published. They have the only copy.

They estimate the cost of publishing the book at $5,000, but would not be able to recoup the cost if they gave the books away to the children, which is what they would like to be able to do. They desperately need local and national sponsors to help them continue the work they have been doing with children.

Gentle Carousel Miniature Therapy Horses is an all volunteer 501(c)(3) nonprofit charity. The teams of 32 miniature therapy horses visit over 20,000 children and adults each year inside hospitals, hospice and assisted living programs, libraries and schools programs for at-risk readers.

Anyone wishing to learn more about the program or donate to the organization can contact them on their Facebook page at www.facebook.com/TherapyHorses.