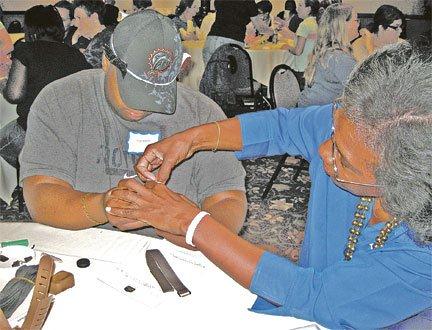 SunState FCU employees Brad Walden and Cassandra Davis team up to build a prosthetic hand destined for an accident victim in a third world country.

SunState FCU became the latest credit union nationally to participate in the Credit Union Helping Hands program. In teams of three, credit union employees worked together to assemble the prosthetic hands destined for victims of land-mines, as the central exercise in a team building and process improvement program.

This was “a huge win-win; probably the best team building exercise we’ve ever done; and in doing it, we attained the additional pleasure of helping someone else,” said SunState FCU CEO Jim Woodward. “What a powerful way to build teamwork,” echoed Vice-President of Marketing Robert Hart. “It’s a rewarding exercise that helps you take a very real look at how your teams truly interact. Not only is there valuable self-discovery, but helping to dramatically improve a person’s quality of life at the same time is a powerful thing.”

The prosthetic hands built by SunState FCU staff during their program will be distributed and fitted globally at no cost to recipients through Odyssey Teams, Inc. and Rotary International. Photos of each assembly team will accompany the hands to their final destination, where lives will be positively impacted by the power of this innovative event.

“Once the teams figured out what they were building, and then where the prosthetic hands were going, a regular team building exercise became a truly life changing event,” said SunState FCU Senior Vice President Joe Bour.  “In little over an hour, each team had built a hand for someone that needed it to survive in a developing country. The message that just a little effort on our part, and a few minutes of our time, can mean the world to our members, really hit home. I can’t say enough good things on so many levels about the Helping Hands project.”