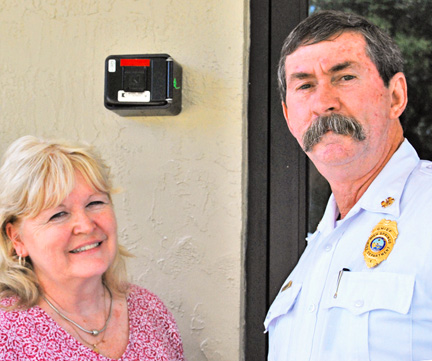 The fire department wants your keys.

Whether the keys are to your private business or your community church, High Springs Fire Chief Verne Riggall wants a copy made accessible to the fire department, in the hope that one day it could save you some money, or maybe even someone’s life.

That’s why he’s working on an ordinance proposal to be brought before the City Commission, which would call for new businesses to install a Knox-Box, and he is also readily encouraging already established ones to get them too.

So what is it?

Essentially, it is a secure box; a wall safe, installed on the exterior of a building containing a key or keys to the building, with the local fire department holding a master key that unlocks all the boxes in its municipality.

The idea is, as Riggall explained, for firefighters to be able to enter a building without damaging the property by breaking doors or windows when they respond to an alarm and no one is there to unlock the building.

The cost of a Knox-Box is relatively inexpensive, especially, he pointed out, in comparison to the cost of replacing an entire door.

Cheaper for your business and for the city

Using this system can save money in another way, too.

When the fire department responds to a fire alarm where there is no fire visible from the outside, and firefighters can’t get in the building to check if everything is okay, they have to wait a minimum of 30 minutes on the scene.

Every one of those minutes is costing the city money. It also compromises the level of service the department can provide at any given time.

If a unit is dispatched and waiting to make sure flames don’t suddenly burst from an empty, locked building, that means those firefighters can’t respond to another call where they might be needed.

And despite all the latest technology and the most responsible property owners, false alarms do happen.

Riggall said the High Springs firefighters respond to about 40 false alarms a year, on average.

Last year, they went to one new business 15 times in the same month, because of alarm system glitches that were being worked out.

By having a Knox-Box, a business can at least cut down on the time it takes firefighters to check that all is well. And in a case where they need to get immediate access to a property, it could save the owner a broken door or window.

To ensure the security of the property, emergency or not, firefighters must enter a code into the computer in the fire truck to unlock a key that unlocks the Knox-Box containing the building key, Riggall explained.

Every time someone takes the key, it gets logged in the computer — who took, at what time and how long before it was put back. There is even a reminder alert that goes off if the key is not returned within a set amount of time.

One of the things he especially likes about the system is it can be used for gated communities too.

St. Madeleine Catholic Church, 17155 NW US Highway 441, is one of four places in High Springs that already have Knox-boxes installed.

In October 2009, the church added a new building, the Family Life Center, to its property.

A church spokeswoman, Loretta Christian, said they came across the idea of getting the box somewhere in the process of going through building regulations and permits.

The box was installed at the main door to the new building, which is where the church holds its services now, while its main building is undergoing renovations. It will hold a key to the new door, and probably to the old building when it is complete, she said.

However, it isn’t functioning yet because the fire department is waiting for its computer system to be updated by the Knox-box company, explained Riggall. That will enable the feature that tracks who checks out the master key from the fire truck.

“I can’t tell you how happy I am to work with you guys on this,” Christian told the chief.

Riggall says the ordinance he is going to propose is modeled after the City of Gainesville’s false alarm ordinance. He said he hopes the requirement for businesses to have Knox-Boxes can eventually be written into the process of obtaining permits, so the cost would be recoupable for the owner.

Though the language of the ordinance has been developed, the department is holding off on submitting it for approval because of the rapid turnover of businesses the city has been experiencing as a result of the economy.

Anyone interested in having a Knox-Box installed, can visit http://knoxbox.com to read more about the system, or stop by the fire department.

“We have everything you need,” said Riggall.   And that includes all the forms, providing assistance in selecting the model that’s best suited to an individual’s particular needs, and help in filling out the paper work and placing the order.